It’s unbelievable that women lay on their backs when giving birth . You talk about a lack of common sense or a lost art . Reminds me of the book of Isaiah chapter 44 were he talks about people can’t reason that their worshipping something that’s not a God . You can apply the lack of ability to reason to any subject as in this case  .

Common sense would tell you that when you stand up , “gravity” would aid or fascilitate in a women giving birth .

I would say it would “decrease” the discomfort of giving birth about 30% which is somewhat significant .

Standing up when giving birth is biblical . There are commentary’s in Genesis about how women would stand between two huge stones that were like “6” in apart and give birth . 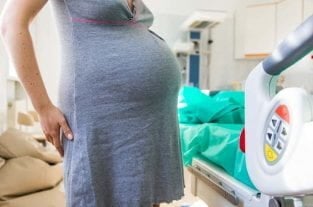 <!––>
For most of human history, women were free to move about during labour. They were able to adopt upright positions that felt comfortable and eased the pain of contractions.It wasn’t until the 1700s that lying down to give birth became the norm, thanks to obstetricians who wanted easier access for examinations. They also found it more convenient to perform procedures such as episiotomies or forceps deliveries.Birth moved from home into hospital during the 1900s. The medical model of maternity care became entrenched in society, along with the expectation that women would labour on a bed. Flat on their back, and sometimes with their legs in stirrups. There was a complete lack of evidence to support this physiologically dysfunctional birthing position, which simply came down to doctor preference, and subsequently, how they were then trained.

However, there are plenty of reasons NOT to lie down while in labour, which is fully backed by evidence.

The significant advantages of giving birth upright are:

Why work harder than you need to? Your uterus contracts out — or forward — from your body. When you’re upright, you can work with gravity and your body’s natural functions in labour. When you’re lying down, you’re bearing the brunt of weight and force, which is going against gravity.

When you’re giving birth upright, making use of gravity and more effectively using your muscles, you’re less likely to need interventions such as forceps or episiotomies. When you’re working against gravity in dysfunctional position, both you and your baby are more likely to need help.

When you’re upright, leaning forward and working with gravity, your contractions will become much more efficient. If you’re lying on your back, your uterus will be contracting upwards, which is not working with your body, but against it.

When you’re off your back, you’ll experience less pain than you will giving birth lying down. This is because you have all the weight on your back and you’re working against gravity.

When you’re working with gravity, in a position that your body and baby is designed to work well, your labour will likely be much shorter. Although, it probably would be closer to “normal” — because lying down may slow your labour down.

#6: Better Oxygen Transfer To Your Baby

When you’re lying on your back, you’re bearing the full weight of the baby, your uterus, placenta and all that comes with it. Doing so puts pressure on important blood supplies in your own body. Compressing the blood supply also compresses the oxygen supply to your baby. By being upright, you’ll provide a better oxygen and blood supply to your baby. In turn, this means that your baby will be less likely to experience fetal distress. Fetal distress that cannot be rectified quickly usually results in a caesarean section.

Studies have shown that by giving birth upright, a mother’s overall satisfaction of her birth increases. And that’s no surprise given what we’ve already learnt – that an upright labour can result in a less painful labour, with less intervention likely, and so much more.

Lying down reduces pelvic diameter about 30%. Especially if you have concerns about having a big baby (which you shouldn’t be, because your body is cleverly designed to birth!), lying down is not going to help your body open as well as it could. Being upright opens up your pelvis, whereas lying down closes it up. This is why scans are inaccurate in diagnosing your pelvis’ ability to birth your baby.

#9: Lying Down Forces The Mother To Push “Uphill”

Pushing “uphill” against gravity can be ineffective and exhausting. Getting upright means you’re pushing “downhill” instead .

Of all the subjects I can think of , this one , that there is no thought in in the medical profession to giving birth “standing up” to let gravity help is unbelievable  . How could something so simple and so basic be unrealized is beyond me .

These people in the medical profession go to school for like a decade after high school , yet their devoid of common sense or the ability to reason  .  Reminds me of  1 Cor 1 : 20 – 27 [Niv] bible .