A nail is a horn-like envelope covering the tips of the fingers and toes in most primates and a few other mammals. Nails are similar to claws in other animals. Fingernails and toenails are made of a tough protective protein called alpha-keratin. This protein is also found in the hooves and horns of different animals.

A healthy fingernail has the function of protecting the distal phalanx, the fingertip, and the surrounding soft tissues from injuries. It also serves to enhance precise delicate movements of the distal digits through counter-pressure exerted on the pulp of the finger.[1] The nail then acts as a counter-force when the end of the finger touches an object, thereby enhancing the sensitivity of the fingertip,[12] though the nail itself has no nerve endings. Finally, the nail functions as a tool, enabling for instance a so-called “extended precision grip” (e.g. pulling out a splinter in one’s finger), and certain cutting or scraping actions.

The growing part of the nail is under the skin at the nail’s proximal end under the epidermis, which is the only living part of a nail.

In mammals, the growth rate of nails is related to the length of the terminal phalanges (outermost finger bones). Thus, in humans, the nail of the index finger grows faster than that of the little finger; and fingernails grow up to four times faster than toenails.[13]

In humans, nails grow at an average rate of 3 mm (0.12 in) a month.[14][15] Fingernails require three to six months to regrow completely, and toenails require twelve to eighteen months. Actual growth rate is dependent upon age, sex, season, exercise level, diet, and hereditary factors.[16] The longest female nails to ever exist measure a total of 601.9 cm.[17] Contrary to popular belief, nails do not continue to grow after death; the skin dehydrates and tightens, making the nails (and hair) appear to grow.[18]

How should healthy nails look : They should be semi- transparent, light pink and intact with possible a white [ little moon] just above the cuticle . 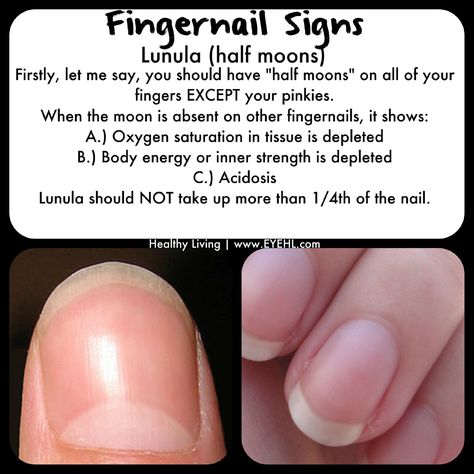 10 Nail Symptoms and What They Mean for Your Health

Your nails may yellow with age or due to the use of acrylic nails or nail polish. Smoking can also stain nails a yellowish hue. If your nails are thick, crumbly, and yellow, a fungal infection could be to blame.

Less often, yellow nails may be related to thyroid disease, diabetes, psoriasis, or respiratory disease (such as chronic bronchitis).

Lifestyle factors may play a role here, such as if you have your hands in water a lot (washing dishes, swimming, etc.), use nail polish remover frequently, are exposed to chemicals (such as cleaning products) often, or live in a region with low humidity.

Cracking and splitting can also be caused by a fungal infection or thyroid disease, particularly hypothyroidism. Brittle nails may also be due to a deficiency in vitamins A and C or the B vitamin biotin.

Clubbing describes when your fingertips become enlarged and the nail becomes curved downward. It can be a sign of low oxygen in your blood and is associated with lung disease. Clubbing can also be related to liver or kidney disease, heart disease, inflammatory bowel disease, and AIDS.

Small white spots on your nails are usually the result of nail trauma. They’re not cause for concern and will fade or grow out on their own. Less commonly, white spots that do not go away could be due to a fungal infection.

Horizontal ridges may also be due to trauma or a serious illness with a high fever (such as from scarlet fever or pneumonia). John Anthony, M.D., a dermatologist at the Cleveland Clinic in Ohio, explained them this way to TIME:

“This is typically the result of direct trauma to the nail or a more serious illness, in which case you’ll see it on more than one nail at a time … Your body is literally saying, ‘I’ve got better things to do than make nails’ and pauses their growth.”

Horizontal ridges, also known as Beau’s lines, may also be due to psoriasis, uncontrolled diabetes, circulatory disease, or severe zinc deficiency. Another type of horizontal line is known as Mees’ lines, which are horizontal discolorations that may be due to arsenic poisoning, Hodgkin’s disease, malaria, leprosy, or carbon monoxide poisoning.

Vertical ridges are typically a normal sign of aging and are not a cause for concern. They may become more prominent as you get older. In some cases, nail ridges may be de to nutrient deficiencies, including vitamin B12 and magnesium.

Nails that curve upward at the edges, taking on a spoon-like appearance, may be a sign of iron-deficiency anemia, hemochromatosis (excess iron absorption), heart disease, or hypothyroidism.

If your nails have multiple pits or dents, it’s often a sign of psoriasis. Nail pitting may also be due to connective tissue disorders (including Reiter’s syndrome) or alopecia areata, an autoimmune disease that causes hair loss.

Black streaks or painful growths on your nail warrant an immediate trip to your physician, as they may be due to melanoma, the deadliest form of skin cancer.

10. White Nails with a Strip of Pink

If your nails are mostly white with a narrow pink strip at the top, known as Terry’s nails, it could be a sign of liver disease, congestive heart failure, kidney failure, or diabetes. Sometimes Terry’s nails may also be due to aging.