Where would you be without your microwave oven? Aren’t they just a huge time-saver? You can cook a meal in seconds. Even frozen food can be defrosted and ready to eat in a matter of minutes.

But have you ever wondered… are microwaves safe? Are there any dangers to using them? How could there be any dangers? If there were, the government would have taken microwave ovens off the market, right? These are the questions we’re going to explore in this article.

Microwave Ovens Use Microwaves – a Form of EMF

As the name suggests, “microwave ovens” use microwaves. These microwaves, which are a form of electromagnetic field (EMF) generated by a magnetron, vibrate at a speed of 2.4 billion times per second. This causes the water molecules in the food to resonate at very high frequencies and generate heat.

Conventional heating of food is a different, much more gentler process altogether. Heat is transferred by convection from the outside to the inside.

Cooking with microwaves begins in the cells and molecules where water is present. This energy is transformed into frictional heat. These are called thermic effects. Added to this are athermic effects which are not currently measurable but are thought to deform the structures of molecules and have qualitative consequences.

Few people realize that when you use a microwave oven, the microwaves do not stay within the confines of the oven.

Microwave ovens have to meet safety standards set by the FDA. These standards “limit the amount of microwaves that can leak from an oven throughout its lifetime to 5 milliwatts (mW) of microwave radiation per square centimeter at approximately 2 inches from the oven surface.” This might sound quite rigorous, but it’s not.

What this means is that when you switch your microwave oven on these EMFs permeate into your home… traveling through walls, ceilings, and you. These EMFs, though being in the non-ionizing range of the EMF spectrum, are not negligible.

In May 2011 the World Health Organization officially classified this type of EMF exposure as a class 2B possible carcinogen.

Added to this, a microwave ovens’ cables and motor also give off high magnetic fields, often over 10 milligauss. Exposures of just 4 milligauss have been firmly linked to leukemia. Not surprisingly these magnetic fields have also been categorized as carcinogenic.

Twenty years of Russian research, and German studies dating back to 1942 in Berlin, make a strong case against the safety of microwave cooking.

The Nazis are thought to have invented the first microwave ovens to provide mobile food support to their troops during their invasion of the Soviet Union in World War II. After the war the United States War Department was given the task of researching the safety of microwave ovens. But it’s the Russians who are credited with having performed the most thorough research.

After the war the Russians set about researching the biological effects of microwave ovens. This led to microwave ovens being banned in Russia in 1976. The ban was later lifted during Perestroika to promote free trade with the west.

Their findings led the Russian government to issue an international warning about possible biological and environmental damage associated with the use of microwave ovens and other similar frequency electronic devices such as cell phones.

Are Microwaves Safe? What the Research Tells Us

The research on microwave ovens reveals the following… 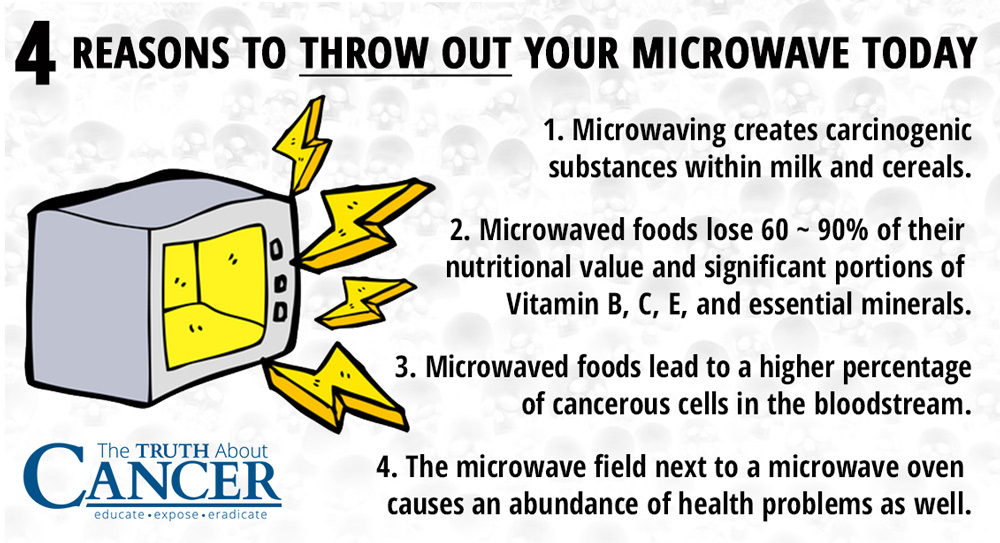 Info obtained by [ The truth about cancer ]